A new art book is on it’s way and it looks very promising! The Necronomicon Pop-Up Book is the fourth pop-up title published by Poposition Press and it’s the darkest and most evil pop-up book ever made. For those who want to be first, you can already pre-order this beauty. We just can’t wait to get our hands on a copy of The Necronomicon Pop-Up Book and as soon as we can, we will share a video review about this book. But first things first! Lets take a closer look at what we know already!

This pop up tome of unimaginable freakish fright was inspired to become real when Skinner started working with Poposition Press a few years ago as one of the artists featured in the Pop Up Art Book. He saw what was a gateway to potential occult heresies. His horrible rattling maggot mind started to germinate ideas… What could he do to merge his love for disturbing weird horror and his own interest in the macabre pop up arts?

The Necronomicon Pop-Up Book is based on the works of early 20th century writer H. P. Lovecraft. His famous horror fiction tales, published only in pulp magazines, became legendary over years and a great inspiration for many writers, comic artists and illustrators. Lovecraft’s classic horror stories know many adaptations but this one must be the most original and graphic of all!

This pop-up book is a dark and sinister pop-up title with five spreads illustrated by Skinner and engineered by Rosston Meyer. In case you’re wondering: this book is named after the fictional Necronomicon book, mentioned by Lovecraft in The Hound, and it’s more real than ever. Skinner’s bizarre and psychedelic style reminds us of the classic cartoons and Heavy Metal album artwork from the 80’s. A perfect fit for a horror themed pop-up like this. Lovecraft’s tales and Skinners artwork combined with Rosston Meyer’s engineering, it all looks amazing.

The gallery above shows colorful close-ups of Skinners bizarre artwork captured in 3D pop-up scenes. The first spread named At the mountains of Madness tells H. P. Lovecraft’s story about the events of a disastrous expedition to the Antarctic continent in September 1930 and what was found there by a group of explorers, led by the narrator Dr. William Dyer. A horrifying story that even looks more terrifying trough the imagination of Skinner.

The Necronomicon Pop-Up Book is available in two editions: a standard Earth Dweller edition with five pop up spreads, and a special limited edition. The Elder God edition has a gold and silver foil embossed case wrap, contains a custom laser etched acrylic slipcase, one art print and is signed by Skinner. Make sure to check out the website for more details and specials like the free pin that you get when you place a pre-order.

Each spread is 11″ x 17″ when opened and includes two pull tabs with text from the original stories, front and rear endleaves and a magentic clasp.

Each spread is 11″ x 17″ when opened and includes two pull tabs with text from the original stories, front and rear endleavess and a magentic latch.

Glow in the Dark Enamel pins

The glow in the dark enamel pins you see below are designed by Skinner and already available at the website. Meet Yithian, Cthulhu, Evil Meteor, Elder Thing and Necronomicon! Each pin is available individually or in a set of five. Like we’ve mentioned before, you can also get one pin for free when you pre-order the book. More info at necronomiconpopup.com.

The production of this pop-up book is currently in progress and Poposition Press expects to ship all books out in Q1 2018. Email updates will be sent to all customers that placed a pre-order as production is completed and shipping dates are set. Check out the website for updates and more info. 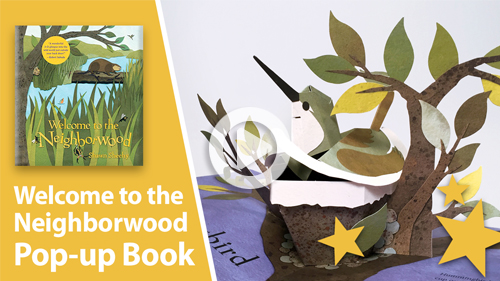