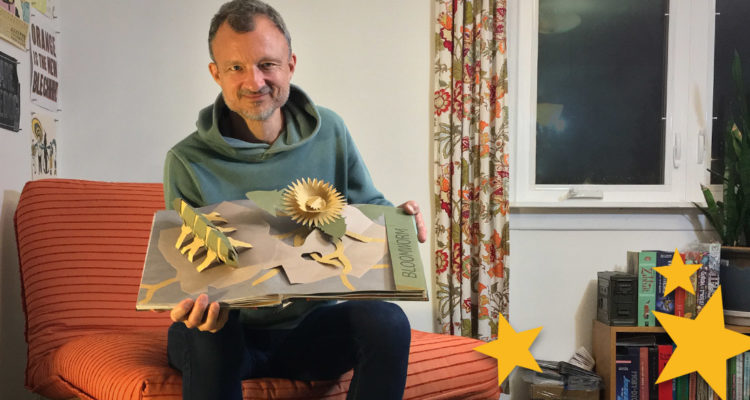 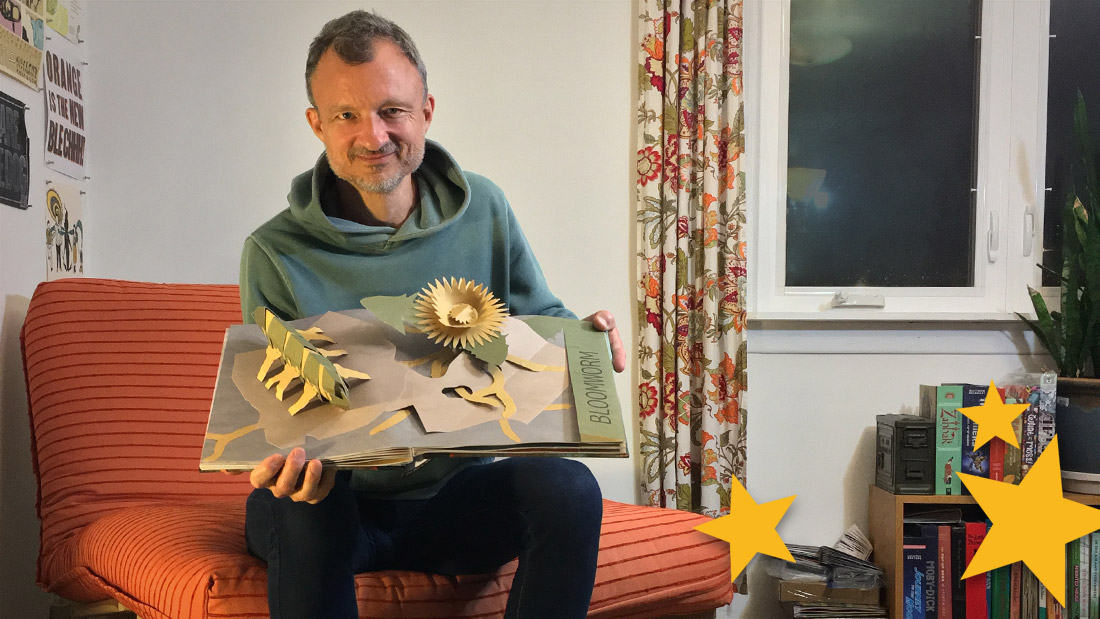 2018 is an exciting year for Artist and Paper Engineer Shawn Sheehy. His upcoming pop-up book Beyond the Sixth Extinction will be released on October 9th and he recently followed up Ann Montanaro Staples as the new director of the Movable Book Society. We did a full review of Beyond the Sixth Extinction and had the opportunity to ask Shawn some questions about his new book and about his role as director of the MBS.

BPUB – Congratulations! We have heard that you’ve followed up Ann Montanaro Staples as the new Director of the Movable Book Society.

SS – I’m proud, delighted (and a bit intimidated) to be following Ann as the next MBS director. We’ve been transitioning for a couple of months, so it’s going smoothly. Ann has positioned us well for this moment!

BPUB – Can you tell us what your role as an MBS Director is about?

SS – My first job is to divide the labor. Ann was a tireless leader who shouldered many of the responsibilities. The future of the organization will depend on getting others involved in the operations. I’ll continue to serve as conference chair (or maybe co-chair). I’ll oversee the board and the various positions, such as membership, treasury, and newsletter editor.

BPUB – How did you get involved in the MBS and what was your first introduction?

SS – My first meeting was in Milwaukee in 2002. I believe I was asked to join the board in 2012, and if I remember correctly the board’s primary interest was including someone who made pop-up artist books. 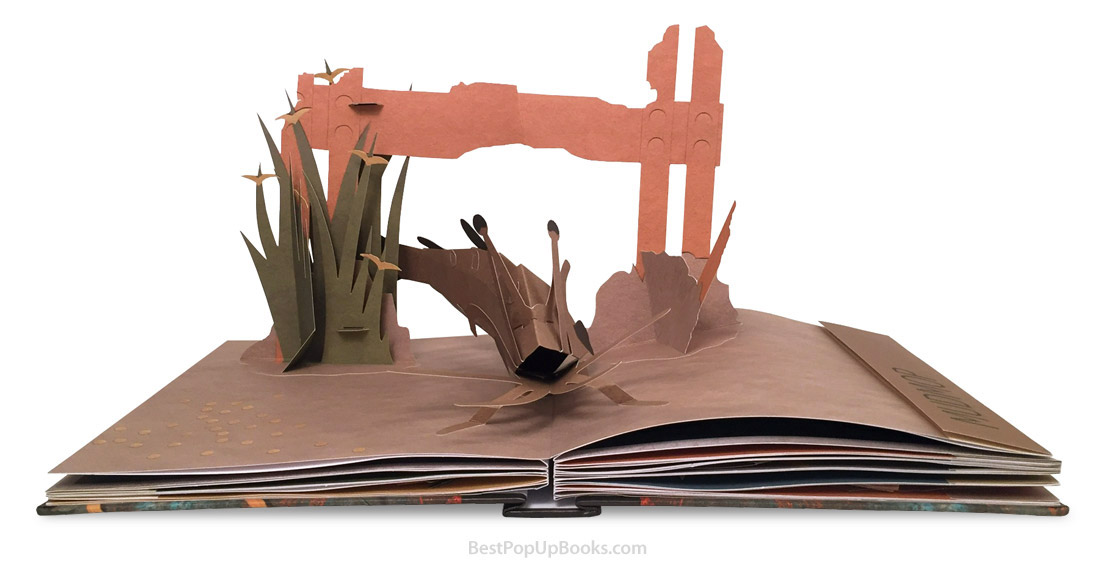 Pop-up “MUDMOP” from Beyond the Sixth Extinction

BPUB – Can we consider you a pop-up book collector or creator? Or maybe both?

SS – I’m definitely more of a creator. I have a study/teaching collection of about 150 titles, and they are well-worn.

BPUB – We have noticed that over the last decades, Paper Engineering has developed really fast and many new talents have joined this profession. Are there any highlights you would like to share that you believe are part of this development?

SS – It seems reasonable to think that—especially in the U.S., where I am most familiar—the DIY movement (together with increased availability of book arts instruction) is partly responsible. Crowdsourcing also has had a big impact. So has improved networking through the internet and social media. All of these factors help to draw in, draw together, and support individuals who might otherwise not get traction in commercial publishing.

BPUB – With the past in mind, how could the future look like for pop-ups and paper engineering? Any thoughts about that?

SS – Sam Ita asked me this question in an interview last week. My immediate response was “France!” Today, my immediate response is “Women!,” especially after last week’s conference. I loved seeing the work of up-and-coming engineers like Vanessa Yusuf and Amy Nayve (both from Southeast Asia.) This once-male profession has definitely integrated—if you consider paper engineers for both limited editions and trade editions, we had nearly twice as many female engineers in attendance at the conference as male (of 42 total).

“Many things could be evolutionarily possible, given enough time.”

BPUB – Talking about looking into the future, we would like to know more about your latest book: Beyond the Sixth Extinction: A Post-Apocalyptic Pop-Up. It’s beautiful! You must be really proud of the result?

BPUB – How did you come up with the idea to create a pop-up book about this subject?

SS – Somewhere around 2005, I stumbled on The Sixth Extinction: Patterns of Life and the Future of Humankind by Richard Leakey and Roger Lewin. For those who know my other books—including my artist books—they all have an ecological bent. I easily feel distressed about losing ecological diversity. That feeling is augmented by recognizing all that we don’t know about the many unnamed species we are losing. I was deeply inspired to explore this topic; and especially to think through to the other end of the extinction event, when species diversity will be restored. It gives me hope to consider that even if humans kinda mess this up in the present, the ecosystem knows how to correct itself in the future.

BPUB – The artwork by Jordi Solano looks gorgeous! Based on what criterium did you select an artist for the artwork?

SS – Jordi was hired by Chris Paul. She found him through an agency and gave me the opportunity to offer an opinion. We were pretty lucky to have him on board. His illustrations are just right.

BPUB – It’s a fictional book but what logic did you use to develop the creatures in this pop-up? In your opinion, how realistic would it be for animals to survive and emerge into your designs?

SS – All of the creatures in the book are based on something that currently exists. Many of these creatures are comfortable around humans, and thrive in human-made environments. Most are omnivorous, and therefore possess a certain level of intelligence. (Omnivores have to be smart enough to not eat something deadly.) Nearly all of the adaptations were inspired by looking at the characteristics of other varied creatures. For example; the rotrap was once a house mouse, and I was influenced by the anatomy of a sea anemone when I evolved it forward. I leaned heavily on science to invent the creatures—ecologically, it made sense to make pigeons larger, fiercer, and with brood pouches—but it’s still fiction. Who knows? Many things could be evolutionarily possible, given enough time. 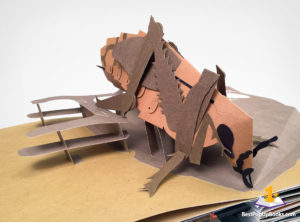 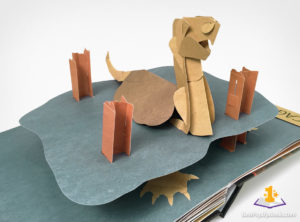 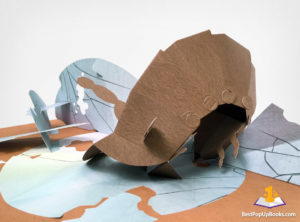 Pop-ups from Beyond the Sixth Extinction

BPUB – You also did all the writing. Did your profession help in any way to write about this subject?

SS – I have written a fair amount academically, and that probably shows in the style of this fiction-written-as-a-field-guide. But I also write all of my artist books. I like to write. It’s an integral part of the concepting of a project, and it’s probably my favorite part.

BPUB – From an engineering perspective, what was the biggest challenge and the hardest pop-up to design?

SS – No question: the clam fungus required the most revising to get the mechanism to work smoothly and consistently. But I really love it–it’s so satisfying.

BPUB – It looks like you’ve found a style that fits you? We recognize it from Welcome to the Neighborwood!

SS – For sure! All of my artists books are created in cut paper, and I brought that style over to the trade books. It’s one of the reasons (I am told) that Candlewick got interested in my work. They liked the handmade paper out of which everything was made.

BPUB – Do you have any plans for a new pop-up book that you would like to share with us?

SS – My most immediate next big thing is my next artist book. But it’s far too shapeless to discuss yet…

BPUB – Thank you Shawn for this interview! We can’t wait to see what your next pop-up book will be about!

SS – Thanks for the interview, and thanks for featuring the book on your site! You two do great work!

Our full (video) review of Beyond the Sixth Extinction: Click here

Order at Amazon: Beyond the Sixth Extinction: A Post-Apocalyptic Pop-Up

In this collectors interview, we meet Massimo Missiroli from Italy. He started collecting pop-up books back in 1978 and now owns an impressive collection of classic pop-up

In this collectors interview we meet Reinhard Tenbrock. Reinhard

Simon Arizpe, who started his career as a Paper

The newly released Necronomicon Pop-Up Book by Skinner is another 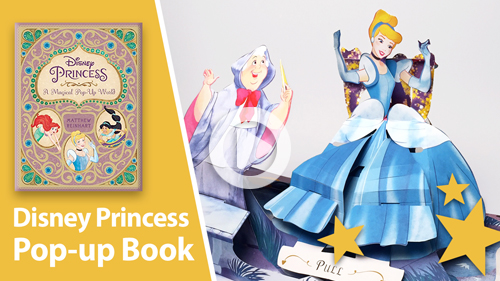 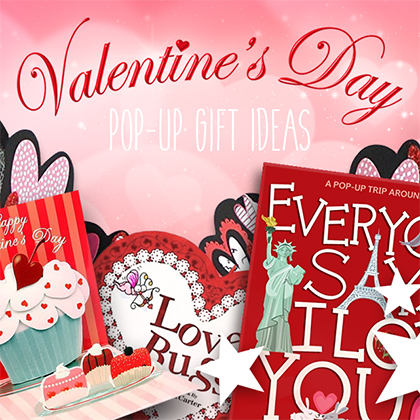 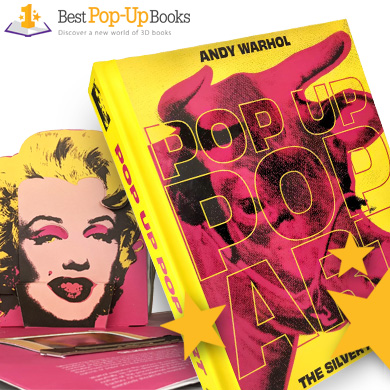 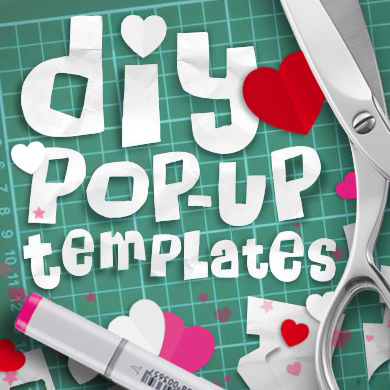